A parallel circuit with two LEDs

For the last few months, I have been leading sessions with a group of beginner digital makers who wanted to learn how to use LEDs to make an art project. This group had no prior experience with electronics and I wanted to give them the confidence to have a go and develop their skills. I have had my own struggles with digital making, and I really wanted to see if I could help others overcome the same hurdles.

In issue 16 of Hello World, I described the first session that I planned. I decided to start with the very basics and show the group what a breadboard is, how it works, and how they can use it to build circuits. In this article, I will update you on how that session went and also outline the plans for session two.

How do you pronounce LED?

What I absolutely love about my group of digital makers is that they really aren’t afraid to ask questions. This is exactly as it should be! When you are learning something new, the more questions you ask, the better it is for you and for those around you. I made this very clear to my group at the beginning. I wasn’t there to judge them or criticise them for not knowing things; I was there as a support, to guide them along the way. Whatever questions were on their minds, they could ask without fear of judgement.

Establishing this kind of learning environment is so important for newbie makers. There is often this perception of elitism for those that can make things, and those that can’t. This is a really interesting viewpoint, as nearly all the digital makers that I have met as an adult have been incredibly patient and supportive. I think the perception comes from experiences that we have growing up, and also our own fears of looking like we don’t know what we are doing.

An LED has two legs. The longer leg is positive and the shorter leg is negative. This seems like a really simple sentence that is easy to remember, but it really isn’t. I think it must have taken me several projects to commit that fact to my long-term memory. Throw that sentence in with jumper wires, breadboards, resistors, and a whole plethora of new terminology, and it isn’t surprising how quickly the fact is forgotten.

I used lots of images, diagrams, and reminders with my group to help establish the new key terms in their long-term memory. I also used quick-fire quizzes to see what they could remember, to give me an idea of how much support they still needed with certain terms. 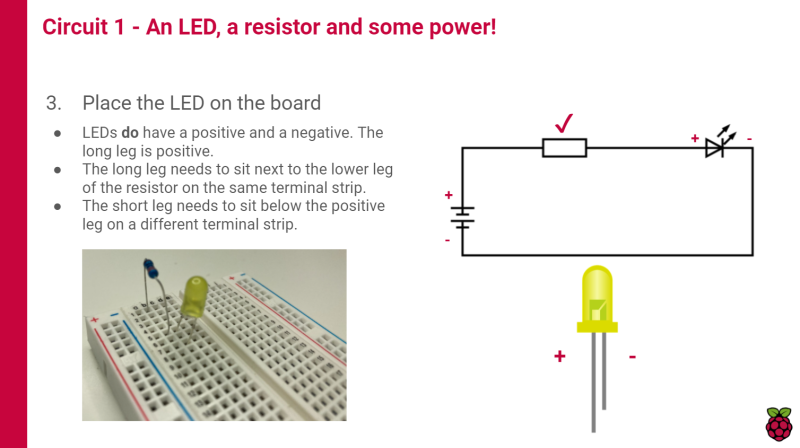 For the first few circuits, I used step-by-step guides on how to build them. I included instructions, a circuit diagram, and pictures to help them see what they needed to do at each step. As the circuits progressed, I tried to flip that model a little and taper off from step-by-step instructions. I would show them the circuit diagram first and see if they could then build it independently.

To help with confidence, I encouraged them to have a go and not worry too much if it didn’t work. If they didn’t quite get there, I then provided step-by-step instructions on a slide deck. My method was to slowly but surely get them to problem-solve themselves and check whether their LED was facing the right way, or if they had placed the jumper wire in the correct part of the breadboard. This approach was fairly successful, but I think I probably tapered off a little too early. It is difficult to predict when a group will benefit from the scaffolding being removed, and I made sure I was more careful of this later on in the session.

It is so rewarding to watch a group of makers as they reach their aha moment. One by one, they all finished their final circuit of the session, which was to set up two LEDs in parallel. They were very proud of what they had achieved, and somewhat surprised. They left the session feeling accomplished and eager to carry on to the next session.

This next session will take my group through building a circuit that blinks an LED, using only electronics to turn the LED off and on. It uses an integrated circuit called a 555 timer. This is a classic electronics project for newbie makers. I will start the session by getting the group to see what they can remember, and build a new series circuit with the addition of a buzzer and a push button. I will then move on to taking them through building the more complex circuit that uses the 555 timer to blink the LED.

Join me in the next issue of Hello World, in which I will update you on how this session went and reveal my plans for session three.