Diane Dowling shares the excitement and energy of her and her students’ first robotics competition, the skills learnt, and the challenges met along the way

I had been teaching computer science for around ten years before I discovered robots. One of my students returned from a university taster day to inform me that she had seen something she was sure I would like. It was a poster advertising a free robotics competition for teams of sixth form students. The organisers — Student Robotics — would provide the core electronics kit, and all we had to do was design and build a robot to meet the set challenge (studentrobotics.org). The robot we would build had to operate completely autonomously for three minutes, with no human intervention and no remote control. This meant that when we turned on the robot, it would do only what we had programmed it to do, nothing more and nothing less. From that day on, my students and I were hooked!

The challenge involved collecting and moving a set of large coloured boxes into zones marked on the floor of a 4 m2 arena. Four teams’ robots would compete at any one time and, at the end of three minutes, each zone would be won — and points scored — by the robot that had deposited the most of their boxes into it. To increase the level of challenge, each zone also contained a pedestal and, if the robot could place one of its boxes on the pedestal, it would automatically win the zone. Each team had free reign in the physical design of their robot. The only constraints were that it had to be less than 45 cm3 and with no sharp protruding parts that could damage another robot.

The great thing about getting students to build robots is that the team needs a very wide range of skills. The first task was to make a basic chassis (base frame) and get it to move. The team started with a square piece of wood and planned to mobilise it by a set of motor-driven wheels. Working out which motors would do the job was the first of many physics and mathematical challenges, and I was delighted that the classroom whiteboard was appropriated for many sets of calculations and design work. This was real, applied learning and the students threw themselves into it, discussing which formulae to use and checking each other’s work.

Eventually, motors and wheels were specified, purchased, and unpackaged with great excitement. The next thing that the team needed was some basic carpentry skills. At this stage, it became obvious that none of them had any! We bought a few tools and a workbench, and the classroom took on the air of a maker shed every Wednesday afternoon. Getting the wheels on straight proved an enormous challenge and would haunt us throughout the competition. However, by the end of the first month, the team had an open wooden box with two wheels, two motors, and a stabilising ball castor at the rear. The motor boards, power board, and brain board were connected on a Token Ring network, and all of these components and the battery block were secured to the chassis with hook and loop fasteners. The motors were wired up to the motor boards and the robot was ready for some code!

Student Robotics had provided an integrated development environment (IDE) and core software libraries to interface with. The team’s own code had to be written in Python and then downloaded to a USB flash memory stick and inserted into the brain board. Powering the board and turning it on would automatically run the code, and any runtime errors were logged so we could scrutinise them later. I can still vividly remember the moment when the robot was powered on with a simple script for the first time. The lights flashed, there was a long pause, and then the robot shot across the classroom and crashed into the wall. The team was ecstatic — the robot could move!

Designing a good robot requires a lot of engineering skills, and these are rarely taught in the UK outside of university. The task proved an enormous challenge to the team’s design and build skills. However, by Easter, the robot had grown and sported a set of wonky arms that could be mobilised by an actuator driving some string around a cotton reel. It was competition time!

The competition (pre-Covid) is played over a single weekend. Each team has a workstation and is given some tinker time; then comes a series of league rounds that determine the seedings for the knockout rounds on the afternoon of day two, culminating in the final between the top four teams. In between rounds, the robots can be tweaked and code updated as necessary.

My team was very consistent. We consistently gained a point for moving and, with refined code, eventually got to the point where the robot could reliably move to one of its boxes, scoop it with a wobbly arm, and swish it into a zone. Even now, I can remember the buzz of excitement and the sense of achievement every time we gained a point. We didn’t come anywhere close to winning, but every team member declared it was the best thing they had ever done. The atmosphere, camaraderie, and adrenaline were palpable.

Over the years, the college team got better and better. Every Year 12 student got the chance to compete again in Year 13, and they were able to mentor and transfer skills from year to year. In 2017, the college team reached the finals and was selected in a play-off to represent the UK at the FIRST Global Robotics olympiad in Washington, USA! I am now a trustee of Students Robotics and many of my past students are volunteers in the organisation; robotics has changed all of our lives.

It is impossible to overstate the real learning opportunities that building robots can bring your students, from creative design skills, to coding, maths, physics, engineering, and teamwork skills. And you don’t need expensive equipment to get started. A Raspberry Pi computer is totally adequate to power a small robot, and the Raspberry Pi Foundation has a free course that takes you through building a small buggy and the fundamentals of robotic control (helloworld.cc/buggycourse). You could easily stage your own simple competition in the classroom, with points for completing tasks such as moving, turning, line-following, and obstacle avoidance. Encouraging like-minded students to work in teams can be very challenging and may require some careful management at first. But in my experience, the shared goal will promote genuine team work and allow communication skills to develop in line with technical prowess. 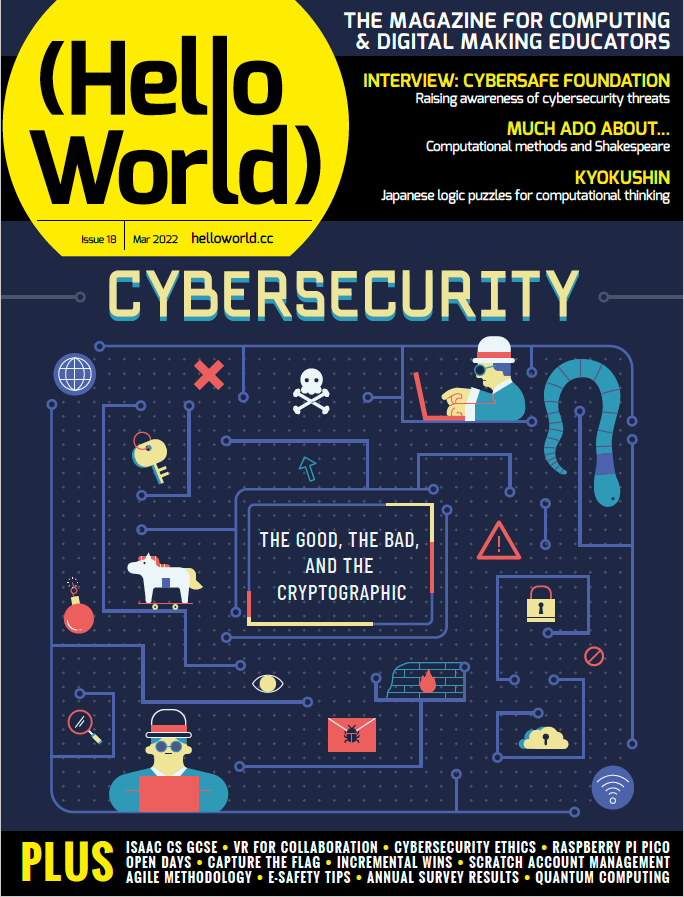 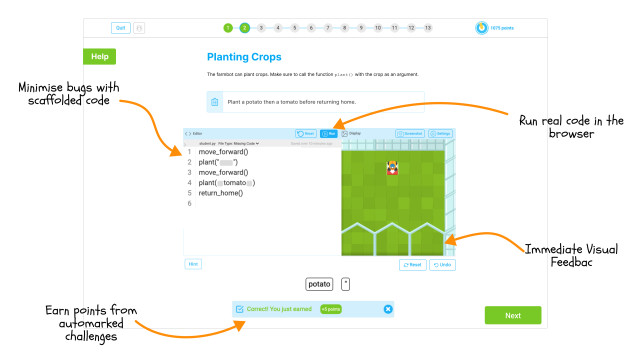 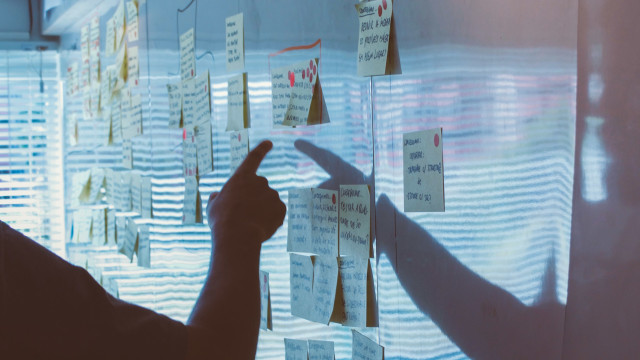 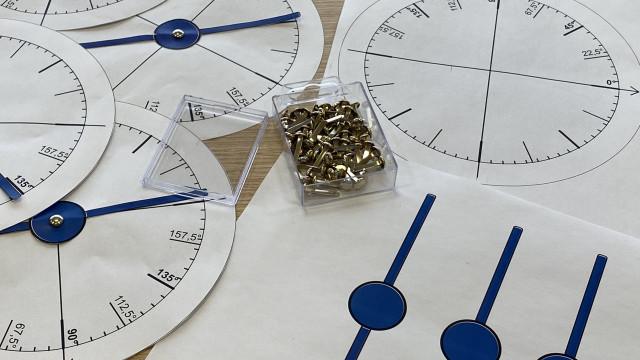 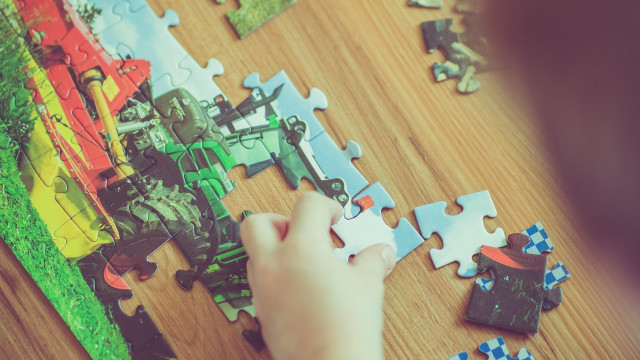 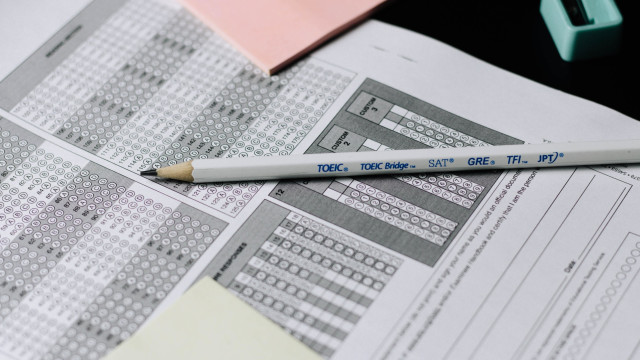 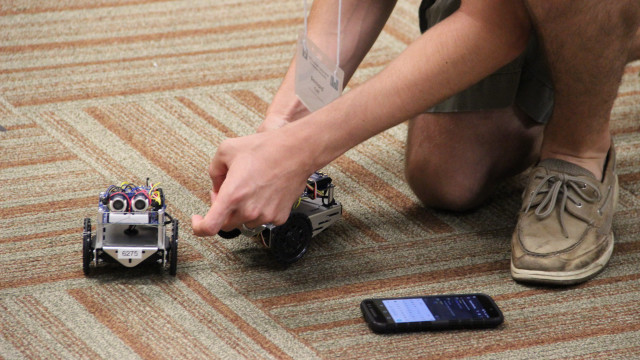