Kat Leadbetter looks at how over 4,000 educators and children across the world celebrated a decade of Code Club, and how you can get involved

Reaching your tenth birthday is always an exciting milestone. I remember my own — full of buttercream icing in a soft-play centre, powered by the thrilling knowledge that I had finally reached double digits. For Code Club, reaching our tenth birthday has been no less exciting. Over the past decade we have witnessed thousands of extracurricular coding clubs launching across the world, supporting young people to learn digital skills for free, regardless of their background.

While the Code Club team provides resources and support, the driving force behind these clubs is the educators and volunteers who run them, generously giving their time for free to help young people access new opportunities. From overcoming a lack of access to technology, to powering through the disruption caused by the pandemic, these club leaders create the kind of change that could only have been dreamed of when Code Club started back in 2012.

To help celebrate the existing community and support new people in connecting to our mission, Code Club hosted a two-week birthday party from 16 to 27 May. The aim of this global celebration was to give back, say thank you to our community, and share a decade of stories.

Our first step was to create a free digital pack of resources for clubs to use during their sessions, including a birthday desktop background, printable party hats and badges, and a coding crossword. We also posted inspiring stories from the community on the Code Club Blog (blog.codeclub.org), to share how Code Club has shaped the lives of our young attendees and of educators such as Bob Bilsland, a veteran Code Club volunteer and advocate: “If you had asked me ten years ago to stand in front of a room and tell people what I love about Code Club, I wouldn’t have done it. The Code Club community has given me the confidence to build those skills.”

The highlight of our celebration was a global codealong on 26 May, at which educators and young people were invited to code a new, birthday-themed Scratch project with the Code Club team. Starting in New Zealand and moving to sessions run in Australia, India, Iraq, the UK, Ireland, and the USA, over 4,000 young people registered to join Code Club and create their own party piñata in Scratch.

Anyone could register for the codealong, regardless of whether they usually run a Code Club, and educators from 21 countries on five different continents got involved. Over each hour-long session, young people used costumes, variables, and ‘forever’ and ‘repeat’ loops to create a simple game. The project was aimed at young people aged 9 to 13 and was simple enough that beginner coders could get involved.

Ysgol y Ddwylan in Wales (@YDdwylan), the Orientations Training Centre in Khartoum, Sudan (@Orientations19), and Rudrappasamy School in Chennai, India, are just a few of the groups that took part. Classrooms hosted mini birthday parties and shared photos of their codealong sessions on Twitter using the hashtag #CodeClubIs10. Some sessions ran with Hindi and Arabic translations to support young people in India, Iraq and the Middle East get coding.

At the end of each codealong, participants were invited to share their finished projects in the Code Club Scratch studio (helloworld.cc/ccstudio). Moamen from Egypt, aged nine, shared his project, which he remixed to change colour, play the Happy Birthday song, and share the message, “The thing I love most about Code Club is making cool stuff” when the piñata broke open (helloworld.cc/moamenproject). Another young coder from Canada adapted the project to share their own important message: “I love candy and coding!” (helloworld.cc/bdayproject).

It takes a village

Ten years ago, when it was first tested in 25 London schools, no one predicted how global Code Club would become. Co-founder Clare Sutcliffe shared her thoughts on what made Code Club so unique at the time: “The thing that was different about Code Club was that we provided all the materials for anyone to take and run a club. Code Club normalised coding and made it easily understandable for anyone.”

Educators agree that Code Club is making an impact. When surveyed, 94 percent of Code Club educators and volunteers said that being part of a Code Club improved young people’s computing and programming skills; 92 percent agreed that attending a club boosts young people’s confidence to explore and learn with computers, as demonstrated by one former Code Club attendee, Kayla (now aged 17), who told us how attending Code Club has influenced her A-level choices: “I attended Code Club in primary school and went on to take computer science at GCSE … In my graphic design A level, I’m creating a set of costumes to use in Scratch. I’m hoping to visit my old Code Club so they can use them in a project.”

As summarised by Clare Sutcliffe, the community is a key factor that allows Code Club to grow and thrive: “Code Club would simply not exist were it not for the fantastic volunteers who give up their time to inspire children. These talented people use their skills, expertise, and passion to make Code Club deeply impactful to children.” We hope to see you at our next celebration — here’s to the next ten years!

At the time of publication, Code Club is preparing to run a space-themed codealong for UK Code Clubs as part of STEM Clubs Week, and there will be more codealongs in the coming months — make sure to follow us on Twitter (@CodeClub) and Facebook (@CodeClubUK) for more news. If you’d like to find out more about starting a Code Club at your school, head to codeclub.org and be sure to join the Code Club team at our online workshop on 5 July, where we will be sharing everything you need to know to get started. You can find details of this session and more at helloworld.cc/ccevents. 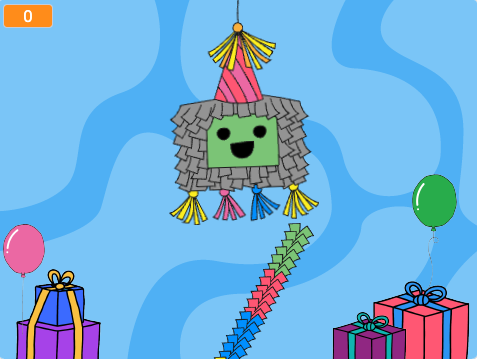 Try creating Code Club’s fun Scratch birthday project with your students. In this project, you’ll use ‘forever’ loops, costumes, and fun sounds to create a party game. Once you’ve finished your code, hit the piñata ten times to release a range of tasty birthday treats from around the world, as well as a special message to Code Club! Try it at rpf.io/party-pinata.