Gemma Coleman speaks to Maker’s Asylum, a community makerspace in India, to discuss their ethos of open innovation and their effort to create a million face shields

On 23 March 2020, India, like much of the world, went into lockdown in response to the coronavirus pandemic. For a physical makerspace like Maker’s Asylum, this could have spelt disaster. “We didn’t really want to shut down the Asylum. It was a physical space, we were going through a hard time, and we were all pretty scared,” the founder, Vaibhav Chhabra, explained. Instead, they saw an opportunity to continue being a vital social community space and to respond to the health emergency that was unfolding, “We immediately started looking at ways in which we could contribute and help out … and so we started prototyping”.

Like all good tech stories, Maker’s Asylum started in a small garage. In those early days, eight years ago, it was a small space in Mumbai for people to share tools and project ideas. “People used to have keys!” managing partner Richa Shrivastava remembers. “Then it grew into a volunteer team and then we started actually working for the organisation. It was very organic.” Education has always been part of the makerspace’s ethos, Richa explains: “People came to Maker’s Asylum to learn about 3D printers, laser cutters, and things like that. It’s always been an educational space, but now we’ve taken it a little beyond that.” They now also offer a number of formal programmes for both adults and schoolchildren to learn practical engineering, design, and maker skills.

The Innovation School is one such programme for students aged 13 and over. It’s split into two parts: skills building and mentorship. Over 54 hours in a one-to-one online format, students learn about programming and flying drones, electronics and robotics, and CAD modelling and 3D design. They can then attend a two-week residency at the Maker’s Asylum lab, where students build their own portfolio using the skills they’ve learnt. “They’re really coming up with something of their own, using their own creativity, and we’re just helping them out, being there to support them and make it happen!” Vaibhav smiles.

The pandemic has seen some silver linings for these courses, with more programmes moving online and removing the travel barrier to entry. This year, Maker’s Asylum has virtually welcomed 200 people from 25 different countries to its workshops to create and make together. “Even digitally, what we’re doing is bringing people together, sharing ideas, and building things remotely,” Vaibhav explains. If this wasn’t enough, the organisation established the M-19 Initiative at the start of the crisis, setting themselves the challenge of designing and creating a thousand face shields for frontline workers.

“We started by prototyping a bunch of designs. We started with paper, then cardboard, and then eventually got to making them with medium-density fibreboard (MDF) on a laser cutter.” Vaibhav waves his hand towards the design iterations displayed behind his desk. “Then we showed our designs to a few doctors and got some feedback. We figured out that MDF happens to be a really bad material, because it’s porous and we couldn’t take that into a hospital. So then we moved to acrylic. And then the aha moment really came when Anool [Anool Mahidharia, Maker’s Asylum’s co-founder] came up with this amazing material called foam board, which really changed everything for us. It’s waterproof, available in every part of the country, super-cheap and laser-cuttable. So it had all the right elements … Plus it was flexible! That was the exciting point: we now had something that worked.”

The team showed their new design to more doctors and hospitals, who were excited by what they saw. At first, there were just three or four staff working on bringing the design to life. Then they put out a call for volunteers, and soon, people from all walks of life were showing up to play their part. “There were doctors in the room, psychiatrists, film-makers … All of us had a role, we were a mini factory.” For many volunteers, having a sense of purpose and being part of a community was a lifeline during the lockdowns. “A lot of them had no idea how to make anything. And that was the fun part, right? We were able to share skills and learn together and make, and the result was beautiful,” Vaibhav explains.

Maker’s Asylum has always been a proponent of open innovation, decentralisation, and openly sharing knowledge. Never has this proved quite as important as during a public health crisis. It wasn’t fast or practical to send face shields around the country to those in need. Instead, by sharing the design and by connecting makerspaces across the country, they were able to bring together makers in 42 cities, towns, and villages and create a million face shields in just 49 days. “India is the land of makers,” Vaibhav exclaims. “The youngest in the collective was 12 years old — he made 300 face shields at home with his family.”

With the same principles, Maker’s Asylum has since gone on to make oxygen concentrators, air-purifying respirators, baby face shields, and rebreathers — units that pump filtered air into a face mask to make breathing easier, particularly for the elderly. “You don’t have access to this level of medical equipment in rural India. So how do you give access to people on that scale so they have the chance of survival?” Richa asks. “Yes, we can buy something, donate it and they will use it. But giving people the knowledge to actually create something and having a more open design philosophy … that was something that resonated with all of us.”

The strapline for the oxygen concentrators embodies this principle: “If you teach a person how to make an oxygen concentrator, they will go on to save a village!” Activating local communities to make oxygen concentrators using locally sourced parts and materials became vital during the second wave of the virus in India. “Most of the oxygen concentrators that were being imported into India started failing, especially around the region that we are in [Goa], because of the climate and the humidity conditions,” Vaibhav explains. “The zeolite inside the concentrators doesn’t last at 95 percent humidity. It becomes like a cake and the concentrator is shot. We were able to see those problems very early on and start coming up with solutions and how we could make them better suited to India’s conditions. The other problem with the concentrators was that they were made for 0–5 LPM [litres per minute], which is a very low flow rate for Covid patients. So the device that we have been building runs at about 15 LPM — this is what we learnt from the hospitals, naval officers, and many more people who were able to contribute and support the collective.” 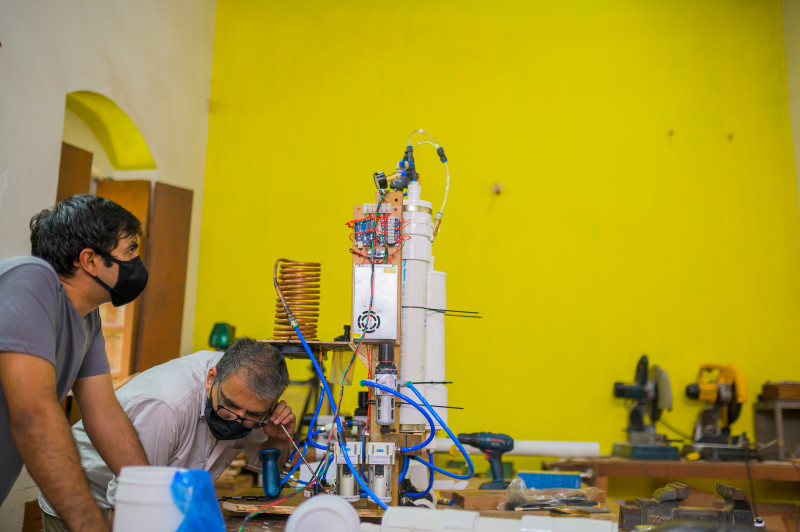 The collective has so far created 30 oxygen concentrators in different parts of the country. “There are groups in Gujarat, Maharashtra, Delhi, Punjab … in every part of India, making them as we speak,” Vaibhav explains. These groups are made up not only of makers, but also of manufacturers such as small shops and factories, and consultants such as hospital workers and zeolite experts. “This has been the beautiful thing about it. Not only have we been able to share what we know with them, but we were able to learn a lot from them about supply chains and scaling our efforts. It was a two-way street.”

So how would Maker’s Asylum sum up the impact of their initiatives during the pandemic? “The learning. All the learning!” Vaibhav laughs. “Not only do we know how to make something new, but it’s the confidence that comes with it. And the impact on maker culture in India — people have a community to share with, get feedback, work together. The power and excitement it gives to each person involved is going to go a long, long, long way! We’ve built a network that is stronger, more resilient, and more confident to create in times of crisis.” The impact on communities is a common theme, with Richa adding, “It gave people a purpose and motivation to get out of that whole mental state of not having the power to change the situation around you. We haven’t felt the pressure of the pandemic as much. There was a larger purpose and that was what really drove everyone and is still driving us today.”

For more information about the M-19 initiative and other projects, including open-source files, visit: makersasylum.com.