A circuit with a buzzer and a push button

This year I have been leading sessions with a group of beginner digital makers who wanted to learn how to use LEDs to make an art project. This group had no prior experience with electronics and I wanted to provide them with the right scaffolding to develop the confidence to make something they could be really proud of.

In issue 17 of Hello World I described the second session of four, which involved the makers using diagrams to create series and parallel circuits. In this issue, I will let you know how my makers added new components to their circuits and how they got an LED to blink without any code!

By this session, my makers could remember which leg was positive and negative on an LED. They also had a good understanding of how the breadboard worked and how a circuit diagram could be recreated on a breadboard. This meant that they were ready to add in some new components, to see if they could apply their knowledge and skills to a different scenario. The first task was to push a button to sound a buzzer.

I gave them the components they would need and a circuit diagram to follow. I also gave them a few tips about push buttons, because they often work in slightly unexpected ways — sometimes, a push button will electrically connect on a diagonal line instead of straight across, for example.

This was quite a tense moment, as I wanted to give my makers a chance to make mistakes and try to fix them for themselves, but the fixer in me just wanted to help and show them what to do. I held back, though, and one by one, they each managed to follow the circuit and get their buzzers working.

Lighting an LED is fun, but there is something very different about sounding a buzzer at the push of a button. I think it allows you to bring out that inner child a little and be a bit silly for a while. You also have the added bonus of knowing that you connected the circuit that made it happen. Applying their understanding to a new circuit with new components definitely helped learners to cement their learning from previous sessions and increase their confidence. The knowledge of a series or parallel circuit could now be applied to many different scenarios, widening the scope of their maker skills.

Now for the main event

After some tinkering with other components, it was time to start the main event: the blinky LED circuit. I let my makers know that the circuit they were about to see was going to look unfamiliar at first glance. To start, I asked them to spot any components that they recognised. After a few moments they could find resistors, LEDs, the battery, and a capacitor.

Slowing down and looking carefully at the individual components in the diagram helped to make it become more familiar. They had seen most of this before, just in a different context. The only new component was the 555 timer integrated circuit. 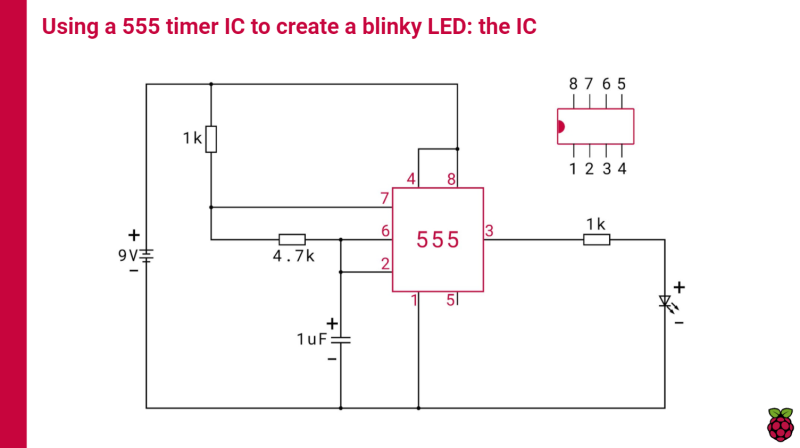 A 555 timer has eight pins (legs). Each one is numbered anticlockwise from one to eight. When you see the same component on a circuit diagram, it looks as if all the pins have been mixed up. This can be a little confusing when trying to relate the diagram to the actual component. This is why I provided a graphic of the component, with its corresponding pins next to the circuit (see Figure 1). This definitely helped a lot, and I would highly recommend doing the same if you plan to use this with your learners.

I guided the makers through each connection in the circuit, highlighting the relevant section and using images to connect the diagram with the real components. They were surprisingly fast at following the diagram and connecting the wires. This was clearly becoming more of an automatic skill for them.

A few of them managed to get the LED blinking on the first try. Others were able to problem-solve and retrace their steps, realising that they had placed a jumper wire in the wrong hole or placed an LED in the wrong way. Eventually, they all had a blinky LED and a real sense of accomplishment.

After finishing the circuit, it was time to start thinking about how my makers could apply their new skills and knowledge to their own art projects. I showed them lots of examples of projects that other people had made using the same skills. I also showed them some projects that involved motors, because if you can sound a buzzer, you can spin a motor! I was very excited to see what they would come up with for their own art projects. You can find out too, in my final instalment of this series in the next issue of Hello World!